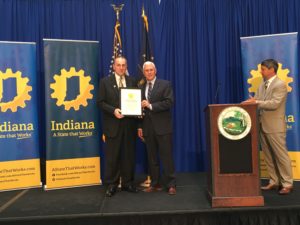 Along with 24 other companies, Superior Engineering was honored by Governor Mike Pence with the Half Century Business Award to recognize the company for its longevity and service to its employees, community and the state.

“As Indiana celebrates its bicentennial, we honor the companies that have helped build a state with a record employment and continued economic growth,” said Governor Pence. “These companies, which have been growing and adding jobs here for at least 50 or 100 years, are an engine of our state’s economy. Their longevity sets a standard for excellence and has laid a foundation for each and every company choosing to start or grow here in Indiana today. Each one of these companies is an important part of our history and I’m confident they will play a key role in our state’s future.”

The Governor’s Century and Half Century Business Awards honor Hoosier businesses that have remained in operation for a minimum of 100 or 50 consecutive years and have also demonstrated a commitment to community service.

Sign-up for our monthly newsletter to see our recent projects and client success stories.
We will never share your email address. The privacy of our clients is a top priority.